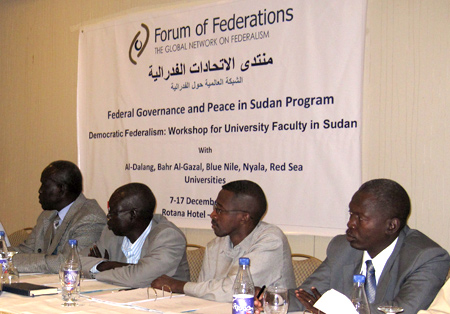 Professors in Sudan discuss how border disputes can be resolved peacefully in federal countries.

Sudanese university professors learned how border disputes can be settled peacefully in federal countries during a workshop on democratic federalism organized by the Forum in the Sudanese capital, Khartoum.

Eighteen academics from five regional universities received presentations on the theory and practice of federalism from the perspective of several different countries during the workshop.

The event concluded with a presentation on sub-national units, often called provinces or states, in federal systems, followed by a panel on borders and territories in Sudan. Members of that panel were Peter Ellens, a political expert with the Assessment and Evaluation Committee of the Comprehensive Peace Agreement (CPA); and Awad Saeed of the Ministry of Federal Governance, the Forum’s main partner in northern Sudan.

Panelists discussed topics such as legal status of state border delineation, and the political complexities around the sometimes violently contested demarcation of the north-south border in Sudan. Resolving the border dispute is central to successful implementation of the Sudan peace agreement because of the nearby location of most of the country’s oil fields.

The Forum also held a panel of senior diplomats from Forum partner countries, including ChargÃ© d’affaires Laurent Charette from Canada, Ambassador Ali Abdo from Ethiopia and Ambassador Salihu Ahmed Sambo from Nigeria. Diplomats spoke about the federal experience in their countries, as well as how to resolve wealth- and power-sharing arrangements in complex transitional environments like Sudan. Sudanese participants were particularly interested in hearing about the cases of Biafra and Eritrea.

The workshop also focused on two group projects designed to strengthen the learning of federalism in Sudan, both inside and outside the classroom. One group presented strategic and practical steps to expand the federalism course curriculum in political science, economic, law and other social science disciplines at the undergraduate and post graduate level. This included detailed course themes, suggested means of inter-university co-operation and networking, as well as practical co-ordination with the leadership of the university leadership and with key government officials.

To advance public outreach, the second group presented a proposal for the establishment of the Sudanese Initiative for Unity through Diversity at the University of Dalang in Southern Kordofan.

The Forum will continue to support participating universities on these and other initiatives to promote dialogue around federal options in Sudan through its broader Federal Governance and Peace Program funded through the Canadian Government’s Department of Foreign Affairs and International Trade (DFAIT).

Other recent Forum activities in Sudan:

Sudanese learn from other federal countries