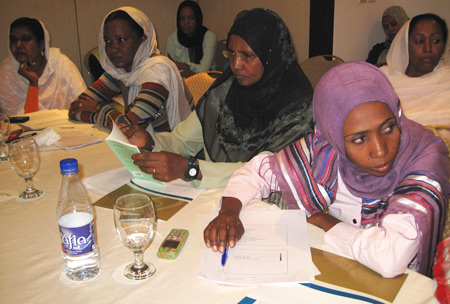 Forty journalists and members of civil society organizations in Sudan took part in a public dialogue and awareness-raising workshop on the fundamentals of federalism and its potential use as a tool of conflict resolution.

The workshop, organized by the Forum of Federations as part of its program on federal governance and peace in Sudan, took place at the Rotana Hotel in Khartoum on Dec. 16, 2009.

Mr. Habib presented an overview of the basic tenets of federalism as well as selected examples from other federal countries relevant to Sudan. Dr. Zahar focused on the potential advantages of a federal solution as a confidence-building measure between former adversaries coming out of violent conflict.

Of particular interest to participants was the issue of trust and confidence-building in the Sudan. Some participants asked questions about which federal mechanisms are most likely to promote effective recognition and respect of differences.

Others asked about the ways federalism could prove useful in preventing secession. The experience of the Province of Quebec and Canada was discussed with particular interest, as Quebec held two unsuccessful referendums on sovereignty, one in 1980 and the other in 1995; as well as the experience of Ethiopia and Eritrea, the latter having seceded from Ethiopia in 1993.

Journalists – many of whom are op-ed writers from major Sudanese newspapers – expressed interest in learning opportunities and materials from the Forum of Federations so they could regularly provide information on federalism to their readers. A working session was planed with journalists to further broaden their knowledge and understanding of federalism.

The Forum’s work in Sudan is funded by a $3.2 million grant from by the Canadian Department of Foreign Affairs and International Trade to be carried out over 21 months.

Other recent Forum activities in Sudan:

Sudanese academics gain knowledge on how to make lasting peace