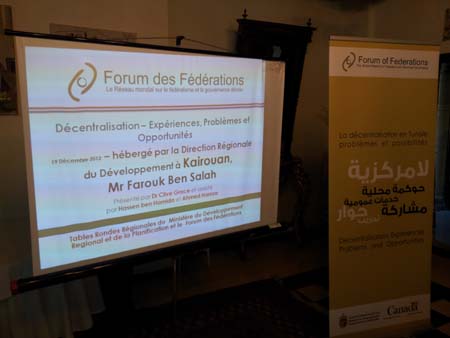 The Forum has delivered six Roundtables in different cities across Tunisia.

The Forum in collaboration with Centre for Applied Training is hosted a workshop on decentralized governance tailored for Civil Society representatives.

Tunisia is at a critical point in its post-revolutionary road to a modern and decentralised democaracy, and the Forum has been supporting the process of decentralisation through a series of â€˜Roundtable’ events and associated activities. The main objectives have been:

The Forum has delivered six Roundtables in different cities across Tunisia, and the last one took place in Tunis on February 7, 2013:

-18th December Kef a key city in the north west

-19th December Kairouan the Islamic (and physical) centre of Tunisia

-22nd January Mednine a major administrative centre in the south

All of the events have been â€˜oversubscribed’ against a target of ten participants at each the average has been eithtee, the upper limit of a Roundtable approach. The participants have been senior civil servants at the regional level from the Gouvernorats and the local authorities, and regional representatives of central government departments. They have also contained two or three members of civil society.

The roundtables have been introduced by a presentation on decentralisation themes and issues. Information on benchmarking public services in decentralised countries has also been provided. The discussions have been lively and informed.

From the roundtables and from a number of associated interviews with key people, the Forum has also developed an outline Training Programme for â€˜training Tunisian trainers’ which will be delivered as a second Phase of this project subject to funding.

The Project Team has been led by Dr Clive Grace OBE, one of the Forum’s Senior Advisors, supported by an in-country team of Chema Gagouri, Ahmed Hamza, Hassen Ben Hamida, Makram Montacer, and Adel Saidi, and by Claude Demange of France.