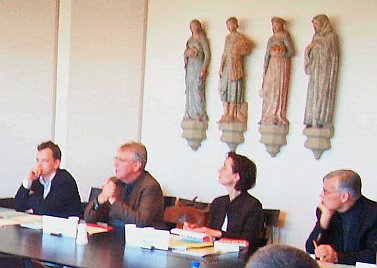 Participating in the Global Dialogue roundtable on local government and metropolitan regions, from left: Prof. Daniel KÃ¼bler of the Institute of Political Science of the University of Zurich; Dr. Paul Huber, former president of the Canton of Lucern; Mrs. Madelaine Meier of the department of justice of the Canton of Lucern and Prof. Thomas Fleiner of the Institute of Federalism of the University of Fribourg.

Thirty participants, including civil servants, elected officials and academics from Switzerland’s cities, cantons and the federal government met in Berne recently to discuss the challenges to local government. The group also looked at how Switzerland and two neighbouring countries, Germany and France, are responding to contemporary urban problems. The event was the Swiss Global Dialogue roundtable on local government and metropolitan regions, one of a dozen being held in federal countries around the world in the Forum’s Global Dialogue program. The Swiss participants looked at everything from the successes and failures of Swiss policies of merging cities and rural governments to problems and trends in local government worldwide.

Mr. Thomas Minger from the Conference of Cantonal Governments and Prof. Andreas Ladner from the Institut de hautes Ã©tudes en administration publique of the UniversitÃ© de Lausanne were the country co-ordinators and organizers of the event for the Forum on Dec. 21, 2006.

Other Global Dialogue roundtables on the same theme will be held in 2007 in Madrid, Spain, on Jan. 26, and in Sydney, Australia, on Feb. 9. Other roundtables were held in 2006 in London, Canada, Jos, Nigeria; and in Bern, Switzerland. Others are planned for Austria, Germany, Mexico and the United States.

Later in 2007, an international roundtable will be held, followed by the publication of a book. The local government theme is the Forum’s sixth in the Global Dialogue series.