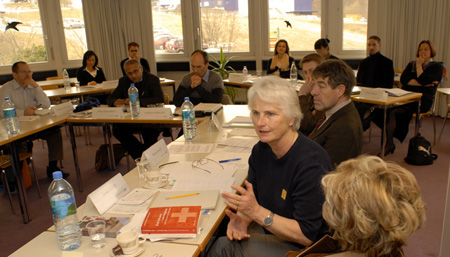 Participants at the Global Dialogue roundtable on diversity in Switzerland share viewpoints at the University of Fribourg.

Participants from historic and immigrant cultures met in Fribourg on March 7, 2008, for a roundtable discussion on diversity in Switzerland. Taking part in the Forum’s Global Dialogue roundtable were academics, members of civil society and public servants. Switzerland’s new linguistic groups include the Roma, Arabic-speaking immigrants and others whose languages are not one of the country’s four official languages German, French, Italian and Romansh. Participants suggested that language training and a speedier path to citizenship would better integrate minorities. Another suggestion for including the new linguistic groups was to allow for voting in the municipal if not cantonal elections.