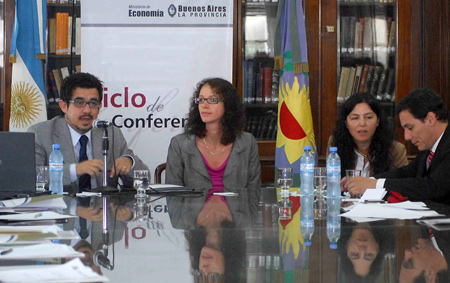 Alejandro Arlia (left), Minister of the Economy of the Province of Buenos Aires, speaks about Argentina and the recent economic crisis. To his left are Diana Chebenova, the Forum’s Director for South America; Patricia Farah, Technical and Administrative Coordinator, Federal Council of Fiscal Responsibility; and Martin Di Bella, Executive Director of the Tax Revenue Agency of the Province of Buenos Aires

In the recent economic crisis, many federal countries faced a difficult choice: either increase spending to create an economic stimulus, or else cling to their existing fiscal restraint policies and laws, experts explained at a Forum event in La Plata, Argentina.

The event, co-organized by the Forum of Federations and the Ministry of Economy of the Province of Buenos Aires, was a one-day seminar held on March 30, 2010, and supported by the Federal Council on Fiscal Responsibility of Argentina.

Seminar participants analyzed the responses by a number of federal governments to the economic crisis in light of each country’s fiscal responsibility laws and policies. They also noted whether these laws were changed or suspended in the context of each country’s recovery from the international financial crisis.

In times of economic downturn, governments often initiate stimulus spending projects, but the tax revenues usually fall and less money is available to fund the stimulus. Then the governments have to borrow, so government debt grows larger than their fiscal responsibility laws allow. The result is that their budget deficits are bigger than allowed.

The experiences of Brazil, the European Union, Germany, Mexico and Spain were presented and contrasted with the experience of Argentina.

The seminar was opened by Mr. Alejandro Arlia, the Minister of Economy of the Province of Buenos Aires; by Mr. Alberto Perez, the Chief of Cabinet of Ministers of the provincial government; and by Diana Chebenova, the Forum’s Director for Latin America.

The fiscal responsibility legislation usually consists of a combination of policy rules, procedural rules, transparency standards, and monitoring and enforcement mechanisms. In decentralized systems, rules are usually established separately at the national and subnational levels of government.

Under their fiscal responsibility systems, central governments and the governments of states and often also municipalities are obliged to comply with ceilings on debt and are required to reach annual targets for revenues, expenditures, and indebtedness. If they fall deeper in debt than allowed, they have to take corrective measures within stipulated time frames. Otherwise, they face different kinds of sanctions, ranging from administrative to personal.

The global financial crisis that started in 2008 created great pressure on the finances of every federal country’s central government and those of the states or provinces as well. To combat the downturn, many governments unveiled special fiscal stimulus packages to boost their economies. Deficits increased and the fiscal balance in many countries deteriorated considerably. Some countries were forced to suspend their fiscal responsibility laws on a temporary basis, either entirely or in part. This happened in Argentina.

Countries such as Brazil, whose legislation includes a legal means whereby it can exceptionally circumvent normal controls in situations of severe economic downturn, were better able to overcome the negative effects of the crisis. As well federations with measures in place to dampen the "boom and bust” periods of the business cycle, such as those with stabilization funds, had more options ready for overcoming the crisis. For example, Mexico established such a fund, called the Stabilization and Exceeding Income Fund, the resources of which were tapped during the crisis.

The Forum invited the following experts to this seminar: