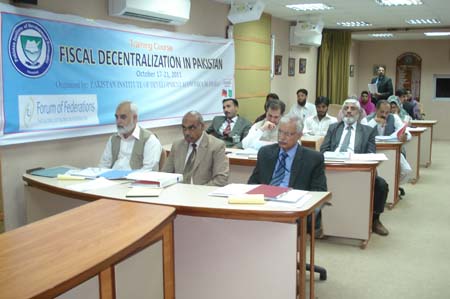 Participants in the Training Course on Fiscal Decentralization which was held in Islamabad, Pakistan

The Pakistan Institute of Development Economics and the Forum held two training courses on Fiscal Decentralization in Pakistan. One of the training seminars took place over three days, from October 17-19, 2011 and targeted mid-career government officials, while the other training seminar, a two day course, from October 20-21, 2011 was designed for senior government officials. Participants were invited from the federal government and all of the four provinces, Punjab, Sindh, Khyber Paktunkhawa and Baluchistan. The Institutions that attended the sessions included representatives from Â the Ministries of Finance, Planning Division, Ministry of Interprovincial Coordination, Services and General Administration Division, University of Punjab, Applied Economic Research Centre, Karachi and Punjab Agriculture Research Institute, Lahore. Over 30 people participated in both courses which also included some students and staff of PIDE.

The 3-day course comprised 9 sessions while the second one comprised 6 sessions. Distinguished Resource persons were engaged for delivering the lectures. The participants were provided the copies of the presentations and related reading material in advance. Books and CDs provided by the Forum’s local office were also given to the participants. The participants were entertained with tea and lunch during the breaks. Moreover they were also taken for a dinner to a restaurant in the outskirts of Islamabad. Both the courses were inaugurated by the Vice Chancellor PIDE. 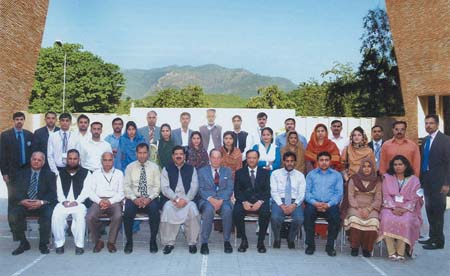 Participants of the first group of the Training Course on Fiscal Decentralization in Pakistan, (October 17-19, 2011, Islamabad)

Participants of the second group of the Training Course on Fiscal Decentralization in Pakistan, (October 20-21, 2011, Islamabad)

In his inaugural address the Vice Chancellor stressed that training course on Fiscal decentralization are extremely importance and has been organized in the backdrop of the 18th Amendment to the Constitution of Pakistan and the seventh Award of the National Finance Commission of Pakistan. He stated that the 18th Amendment and the 7th NFC Award are landmark events in the history of Pakistan. The two together have respectively introduced far reaching changes, in the federal structure of Pakistan and the criteria for the distribution revenue amongst the provinces and the federation. The Vice Chancellor indicated that the 18th amendment has brought about a fundamental change in the federal structure of Pakistan by altering the functional assignments of the different tiers of government. The 7th NFC Award has also introduced major changes in the resource distribution formula. These changes had created amongst academics and practitioners many questions regarding the changes. The purpose of this training is to create awareness about the contents of the 18th amendment and the 7th NFC Award and answer the questions of the participants. 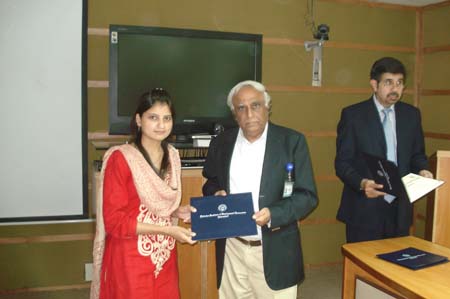 Dr. Rashid Amjad presents one of the participants a certificate of completion

Dr. Rashid Amjad, delivered a lecture on macroeconomic management in decentralized system of governance. Dr. Amjad stressed that after the 18th amendment better policy coordination between the center and the provinces is essential to maintain macroeconomic stability. He stated that the contribution of the provinces to the total tax revenues stands at a low level of 10 percent and argued that provinces could be encouraged to generate more tax revenues if the transfers under NFC awards were linked to the tax efforts of the provinces. 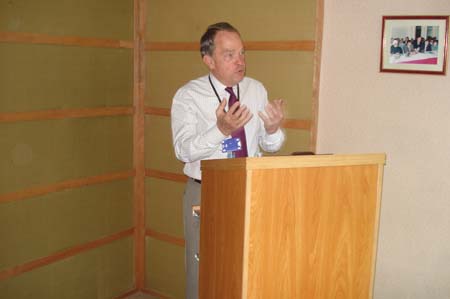 George Anderson, President Emeritus, Forum of Federations, spoke on the issues of federalism in the international context including: expenditure responsibilities and assignments, allocation of the sources of tax revenues, intergovernmental revenue sharing and transfers and macroeconomic as well as microeconomic issues in a federal system. Commenting on the post 18th amendment federalist structure of Pakistan he said the though the expenditure assignment is highly decentralized there are unresolved issues of coordination, moreover revenue assignment is very weak and highly centralized. He outlined the VAT, explaining the concept of VAT, its advantages and the experience of Canada and some other countries that have adopted the VAT.

Dr. Gulfaraz Ahmed, Consultant, lectured upon the "Ownership and Revenue from Natural Resources ». He explained at length the oil and gas resource potential of each province. He delved upon the issues arising out of the 18th amendment in respect of natural resources. He explained that the natural resources are now under joint ownership of the federal and provincial governments and that a mechanism has been evolved to award contracts under the joint ownership.

Dr. Ashfaque Hasan Khan, Dean NUST Business School, spoke on various features of the 7th NFC Award. He expressed the opinion that the Award is based more on political sensitivities rather than on sound economic reasoning. Moreover he said the envisaged distribution of revenue resources is based on exaggerated and unrealistic revenue projections and that the provinces seemed to have prepared their budgets based on these unrealistic projections.

Dr. Athar Maqsood, Professor NUST Business School, dealt upon the decentralization of revenue. He said the tax records are out dated and incomplete, tax administration is weak, exemptions have eroded tax bases and above all there is no incentive to collect taxes. He said the provincial governments tend to buckle under the pressure of politicians in deciding not to levy agriculture tax and not increasing the existing tax bases. He expressed the opinion that in a sense, the provincial governments and politicians have been protected by way of higher allotments under the 7th NFC. He also stated that provincial governments need to strengthen their capacity to levy and collect Agriculture Income Tax and GST on services, especially from transport, construction, and wholesale and retail trade.

Mr. Rana Nasir Khan, Chief of Planning, Planning Commission of Pakistan, spoke on the 7th NFC Award. He explained to the participants the composition of the National Finance Commission, its mandate and the kinds of revenue resources available for division amongst the provinces and the federation. He also dilated upon the existing revenue distribution criteria formula and the historical changes in the criteria.

Dr. Idrees Khawaja, Associate Professor, PIDE evaluated the resource distribution criteria based on literature on the subject. He explained that there is a case for conditional and matching resource transfers. He also said that, for over sixty years, the distribution of revenue resources was based on the provincial share of the population in the country’s population. He further explained that population is one of the less effective methods of fiscal equalization. He stated that though now Pakistan has moved to a multiple indicator criteria but still the â€˜population share’ enjoys a large weight of 82 percent.

Dr. Rashid Amjad, Vice Chancellor PIDE and Dr. Musleh ud Din, Joint Director PIDE, respectively closed the first and second training course with the distribution of certificates to the participants. Dr. Rashid Amjad in his concluding remarks expressed the hope that together the 18th amendment and the 7th NFC Award was usher in an era in which the empowerment of provinces would strengthen the federation rather than weaken it. Dr. Musleh ud Din in his closing remarks spoke about the importance of the course and also informed the participants about the ongoing research collaboration between the PIDE and the Forum of Federations.