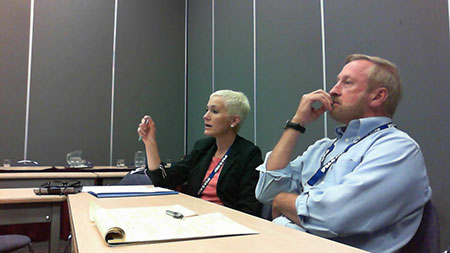 The International Political Science Association’s Research Committee 28 Comparative Federalism and Multilevel governance took advantage of IPSA’s 2014 World Congress that took place in Montreal in July 2014 to host a joint round table with the Forum of Federations dedicated to discussing contemporary trends in federalism research and practice. Rupak Chottopadhyay, the Forum’s president, and Jack
Jedwab, Executive Director of the Association for Canadian Studies (ACS) participated in the round table
on behalf of the Forum of Federations.

The two-hour-long round table took place on July 23, 2014. It was devoted to comparative federalism research and practice in the area of homeland security. Comparative federalism researchers from Canada, the US, Australia, Germany, Brazil, and Switzerland, exchanged preliminary research about the ways in which federal countries have developed and strengthened homeland security policies in their respective countries, at both the state and federal level.

It is our hope that this preliminary round table on a topic that so far has received little attention from the point of view of comparative federalism research will constitute the basis for a further exchange of ongoing research in this area. The participants aim to co-host a panel of presentations at the 2016 IPSA World Congress in Istanbul.

Others in attendance were: Alan Fenna, Professor of Politics at The John Curtin Institute of Public Policy, Curtin University of Technology; Thomas Lancaster, Professor at Emroy University; Sabine Kropp, Chair of German Politics at the Free University of Berlin’s Department of Political and Social Sciences; Wolfgang Renzsch, Professor at the Institute for Political Science of the Otto-von-Guericke University Magdeburg, Germany; Marta Arretche, Director of the Center for Metropolitan Studies, and Sonja Walti, from American University, Washington DC.