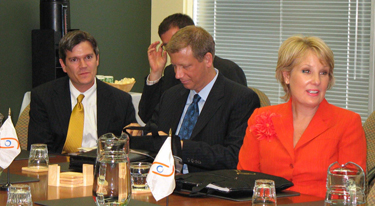 A delegation from the United States met with Forum President George Anderson in the Forum’s Ottawa office recently. The delegates were from the Council of State Governments or CSG, an institutional partner of the Forum’s. The state governments group, which was on a tour of Calgary, Ottawa and Montreal, exchanged information with Mr. Anderson on the role of the Forum, its relations with American bodies, and the role of the Council of State Governments.

Mr. Anderson explained that the Forum has partner governments in seven countries, and although the U.S. is not a partner of the Forum, the organizatione’s Global Dialogue program includes Country Round Table events in several countries including one that is held in the United States. The most recent U.S. Round Table, on the theme of Foreign Relations in Federal Countries, was held in Washington, D.C., on April 27.

The Forum president noted that the United States is the worlde’s oldest federation, and as such, there is much to be learned from Americae’s 230-year experience with this most unique form of government. Mr. Anderson commented that the Forum generally interacts with a designated body, in each of the worlde’s federations, whose task is to attend to issues relating to the state of the federation. There is no such body in the U.S. though, and the delegates agreed that the CSG would aim to informally fulfill that role in the U.S.

The groupe’s six-day tour, from June 22 to June 28, included a visit to the Alberta oil sands, meetings with senior federal officials in Ottawa and additional talks with Quebec government officials in Montreal. (The delegates met with Mr. Anderson on June 26.)