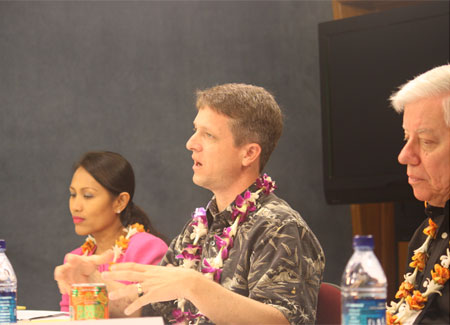 Roundtable participants Sandra Sagisa (left) and John Kincaid (right) listen to Troy Smith speak at a recent discussion on intergovernmental relations in Hawaii. The event was part of the Forum’s Global Dialogue on Federalism.

The stimulus package passed by the American government and its effect on intergovernmental relations were highlights of a recent roundtable of federalism experts and practitioners from across the United States.

Much of the roundtable discussion focused on state governments in the U.S., as they increasingly rely on federal funds to balance budgets despite rigid restrictions. While state governments can indeed influence federal policy when co-operating with other state governments, participants noted that this is a rare occurrence.

The most controversial topic of the discussion was how intergovernmental relations affect democracy and citizen participation. Some defended the multiple pathways – federal, state or local – that issues such as education or health can be implemented in the American federal system. Others argued that these multiple pathways undermine the ability of state and local governments to respond to the diversity of their area and gives citizens less of a sense of efficacy and willingness to participate in government. Most citizens are not concerned with which level of government is responsible for what, participants said. Citizens just want the issues addressed.

The event took place on March 13, 2009 at Brigham Young University, Hawaii. Troy Smith, an associate professor of political science at the university, coordinated the roundtable.