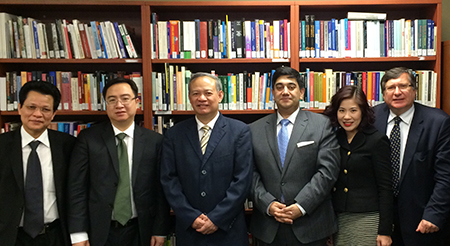 The President of the Institute for Legislative Studies of the National Assembly Standing Committee of the S.R. Vietnam, Prof. Dr. Dinh Xuan Thao and his delegation met on the 22nd of April the President and CEO of the Forum of Federations, Mr Rupak Chattopadhyay, in Ottawa during a study visit to Canada to facilitate the adoption of a wide-range series of laws after adoption of the new Vietnamese Constitution in 2013 by the National Assembly.

Both Presidents agreed that there was tremendous opportunities for collaboration given the broad comparative expertise offered by the Forum.