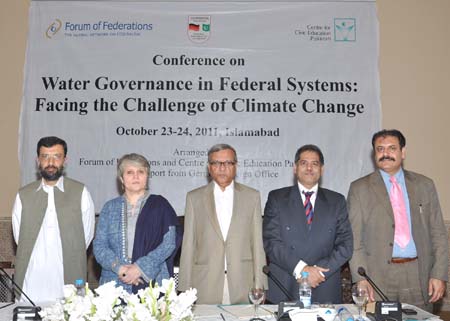 Globally water is becoming a scarce commodity. It attains an additional significance in highly populous agrarian societies like Pakistan. In many countries water is a shared resource and its governance, equitable sharing, and exploitation of its hydro-power potential gives birth to numerous concerns and challenges. Pakistan is no exception. Water governance has been a flashpoint in the context of Pakistani federalism. For a largely arid and agrarian country like Pakistan, water management and its equitable sharing is a vital priority as the country is fast moving from water-stressed situation to water-scarce. Pakistan’s failure to devise an effective strategy for political, economic and technological management/governance of water has led to fall in water availability per person from 5,000 cubic meters in 1947 to 1,100 cubic meters in 2006.

However, recent changes in the Constitution have attempted to redress many of these issues and grievances. Now the provinces can now raise domestic and international loans and provide guarantees and can also establish power generation units without permission or interference of the federal government.

To discuss issues water governance and control of natural resources, sharing mechanisms and conflict resolution structures, The Centre for Civic Education and Forum of Federations held a "National Conference on "Water Governance in Federal Systems: choices/lessons for Pakistan” the on October 24-25, 2011 at Serena Hotel, Islamabad, supported by German Foreign Office
George Anderson, President Emeritus Forum of Federations explained the international perspectives of water issues in federal systems of the world. He said there were some 28 federations in the world in which some were centralized and others were decentralized. "The demand and supply of water could not be matched properly in majority of the countries and most of them are confronting water problem including Pakistan and India. He said that cooperation’s instead of conflicts over water should be sought and regional thinking needs to be promoted. Upstream uses can be negative or positive for downstream, while downstream demand can be positive for upstream development as well as posing disadvantages. In case of shortage of water and conflicts newer agreements to see waters as "shared resource” of "common interest” should be looked upon.

Water expert and former adviser to the Sindh Chief Minister Dr Kaiser Bengali said that Dams do not produce water they merely store the water that is available, there is sufficient evidence that water is in short and declining supply, there is an urgent need to conserve water but the government has no priority to manage the water systems. Provinces have a greater responsibility to manage water efficiently and effectively. He further said that Conservation should be the guiding principle, we need to move from water storage to conservation of available water, we also need to move from large-scale capital and technology intensive, foreign debt-funded, environment degrading approaches to indigenous technology, and management-intensive, ecologically-balanced approaches.

Prof. Dr. S. Shafiqur Rehman, Department of Environmental Sciences University of Peshawar said that the climate change had serious implications which required proper arrangements as 85 per cent rain water flowed downhill from April to September and it required construction of big reservoirs so that water might be stored and utilized for irrigation and also for power generation. He said that in the face of increasing population, urbanization & growth of cities, dwindling resources, system losses, climate change and ensuing changes in precipitation and runoff and lack of storage capacity. Measures like rain water harvesting, construction of large reservoirs, reduction in conveyance losses, recycling and reuse of water, changes in irrigation practices, cost rationalization and community participation in management of water were the answers and need of the hour.

Mohammad Tahir Qureshi, Senior Advisor Coastal Ecosystem IUCN Pakistan said that due to scarcity of fresh water flowing into the sea the ecosystems and livelihoods of coastal areas were under threat. "Sea intrusion due to diversion of river Indus water, high rate of habitat loss and absence of community involvement in planning and implementation of developing program, was leading to loss to human development in those areas. Tahir Qureshi suggested that a national water policy should be developed with the consultation of all the stakeholders and the people should be made aware of the issue.

Addressing the participants, Dr Ishaq Baloch, Vice President National Party said that there were 30,000 tube wells in Balochistan for irrigation purposes and the government was providing subsidy on these tube wells, which had boosted agriculture in the province but its disadvantage was the loss of underground water.

Ms. Bushra Gohar, Member National Assembly and Vice President Awami National Party (ANP) said that the country has sufficient hydro power potential and needs proper exploitation. Energy problem is important but water issue should also be important and proper measures should be taken for its management.

Director Planning and Facilitation Sarhad Hydel Development Organization (SHYDO) Khyber Pakhtunkhwa Mr. Wajid Nawaz Khan who briefed the participant about the measures Khyber Pukhtoonkhwa Provincial government had taken after the 18th amendment in exploring and developing the Hydel potentials of the province.