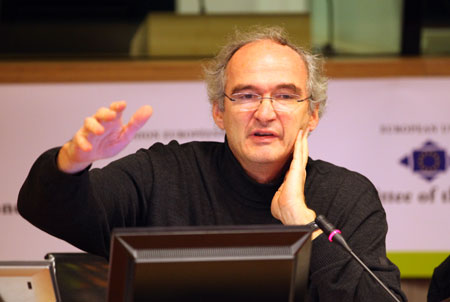 About 60 participants from Western Europe and four federal countries recently attended a conference on immigrant integration in Belgium at a function held by the Forum of Federations in collaboration with the European Union’s Committee of the Regions and the Centre de droit public, of the UniversitÃ© libre de Bruxelles.

The event, titled Immigrant Integration: the Impact of Federalism on Public Policy, examined different views and approaches to immigration taken by federal and sub-national governments from seven countries:

The gathering on November 29 and 30, 2010 is part of a Forum project exploring the relationship between federalism and the integration of immigrants through law, policy and programming. It was attended by participants from Australia, Canada, Nigeria, the U.S. and Western Europe.

It was led by project co-directors Christian Joppke, of the American University of Paris, and Leslie Seidle, of the Forum of Federations. In the deliberations, scholars from each country gave a presentation that provided an overview of their respective federal system and analyzed its impact on measures intended to promote immigrants’ social and civic integration.

The co-directors, and a high-level panel, composed mainly of practitioners, drew lessons from the presentations and highlighted possible implications for public policy with regard to immigrant integration in multi-level government systems.

What emerged from the conference is that in countries with multiple linguistic groups, such as Canada, Belgium and Spain, the provinces and states are becoming more active with regard to immigrant integration than their counterparts in more homogeneous federations such as Australia, the United States or Germany.

Immigrant integration issues may also be linked to national minority identity claims, such as those in Catalonia — an autonomous region in Spain, and Flanders a region spanning northern Belgium.

Participants noted a trend towards a more directive approach to immigrant integration in Western European federations. This is perhaps a spillover from countries such as the Netherlands, where more stringent immigration laws have been enacted.

The approach varies by country, however. In Belgium and Switzerland, parties that are explicitly anti-immigrant are having an impact on the political agenda, whereas in Germany and Spain, no such parties have gained ground at the federal level.

The variation in policy that is emerging among the countries under study was of great interest to participants. Some participants said that such disparities are expected in a federation, even if linguistic and cultural differences are not significant. Some were concerned with a lack of coherence in policy, while others suggested that principles of equty may be weakened by variation in the services offered to immigrants depending on where they live.

The project collaborators will be addressing these and a range of additional issues as they finalize conference proceedings for a work to be published by McGill-Queen’s University Press. 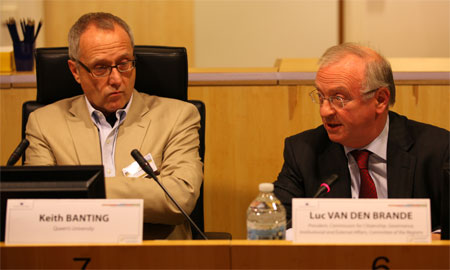 Keith Banting (Queen’s University) and Luc Van de Brande (Committee of the Regions) participate in the closing panel discussion of an immigrant integration conference held in Brussels on November 29 and 30, 2010.