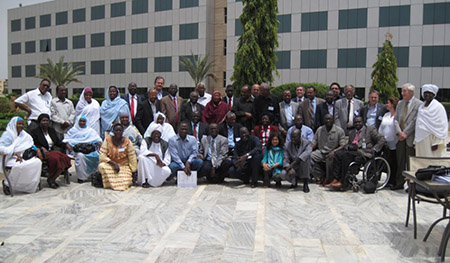 The Forum of Federations recently held a five-day workshop in Sudan to assist Sudanese leaders as they explore options for future institutional arrangements. The workshop was held Aug. 1 – 5, 2010, as the country engaged in a process that could lead to the separation of South Sudan in 2011.

The workshop addressed key policy issues such as border demarcation, other countries’ experiences with secession, petroleum revenue management, and questions of identity and minority rights through a federalism lens with a diverse mix of senior policymakers, civil society leaders, university professors and members of the international community.

Whatever the outcome of the 2011 referendum on the separation of the South, scheduled for next January, it is widely acknowledged that wealth- and power-sharing arrangements will continue to play a central role in sustaining peace, stability, and development throughout Sudan. A key question then is what are the relevant federal types of options for Sudan united or divided – post 2011?

The 30 participants represented all regions of Sudan, including leadership from Khartoum, Southern Sudan, Darfur, the East, and the north-south border states of Blue Nile and South Kordofan. The event was held in partnership with the University of Juba’s Centre for Peace and Development and the University of Khartoum’s Public Administration and Federalism Studies Institute.

The discussions provided a clear picture of the issues and alternatives facing the country.

Participants engaged in group exercises meant to strengthen their ability to develop and implement institutional arrangements that will promote peace, stability, effective governance and democracy in Sudan in 2011, after the expiry of the 2005 Comprehensive Peace Agreement

A team of international experts shared their comparative, practical and theoretical knowledge at the event, as well as advice and technical assistance, to help flesh out the decisions to be made on the various possible scenarios for Sudan.

The team of international experts was led by Richard Simeon, professor of political science and law at the University of Toronto, Canada and recipient of the American Political Science Association’s 2010 Daniel J. Elazar award for distinguished contributions to the field of federalism.

He was joined by Yakubu Aliyu, a public finance economist who recently served as lead technical adviser on economic policy reforms to the former Nigerian Minister of Finance; Bertus De Villiers, a legal practitioner and member of the State Administrative Tribunal of Western Australia; Dassa Bulcha Nemomissa, a former judge of the Supreme Court of Oromia, Ethiopia, and Program Director for the Forum’s Ethiopia office.

Other experts included Shawn Houlihan of the Forum of Federations; Jabulani Sindane an intergovernmental relations practitioner who recently served as Director-General for the South African Department of Water Affairs and Forestry; Tassew Woldehanna, a public finance economist and associate professor of economics at the School of Economics, Addis Ababa University; and Marie-JoÃ«lle Zahar, an associate professor of political science at the University of Montreal and specialist in conflict management.

The event was part of the Forum’s two-year Canadian government funded Federal Governance and Peace in Sudan program which aims to strengthen capacities to implement key federal components of the 2005 Sudan peace agreement and at the same time build the basis for a broader and deeper national understanding about the potential role of federalism to help bring about sustainable peace in Sudan.