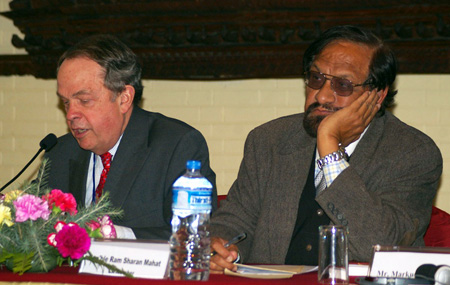 Forum President George Anderson was one of more than 20 foreign experts who recently addressed a three-day conference in Kathmandu on the Dynamics of Constitution-making in Nepal in Post-conflict Scenario.

The event was inaugurated by the President of Nepal, Dr. Ram Baran Yadav, and by Subash Chandra Nembang, the Speaker of the Constituent Assembly (CA).

Mr. Anderson spoke to a group of 70 Nepali politicians, experts, civil servants and NGO staff members on issues governing the choice of a federal model for Nepal.

The Jan. 15 17 Conference was timed to follow the reports of most of the committees of Nepal’s Constituent Assembly, which is working to have a new federal constitution for Nepal in place by May 28, 2010.

Other presenters included former Forum Chairman Bob Rae of Canada, and long-time Forum colleagues Yash Ghai and Jill Cottrell of Kenya, Cheryl Saunders of Australia and Nicole Topperwein, of Switzerland. The experts were brought to Nepal by a wide variety of agencies.

The conference was attended by CA members, national and international experts and representatives of the international community.

Other issues discussed at the conference included: forms of government, implications of moving to a federal structure, constitutional review, bill of rights and remedies, management of the transition phase, national interest and security. Concluding remarks were pronounced by Prime Minister Madhav Kumar Nepal and CA-Vice-Speaker, Purna Kumari Subedi.

While in Nepal, Mr. Anderson also had the honour of a one-hour meeting with President Yadev and met with representatives of various political parties as well as international organizations working in Nepal.

This Forum’s three-year Nepal program aims to assist the post-conflict country in building its capacity to develop and implement a federal democratic system. It is funded by the Swiss Agency for Development and Cooperation (SDC) in a program that runs from August 2008 until March 2011.